Joseph shines among all mankind 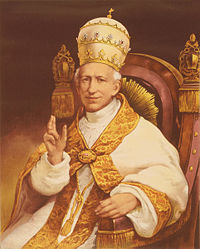 Fr. Hardon’s Catholic Prayer Book with Meditations is a favorite of mine. In a chapter entitled “Foster Father of the Lord,” Fr. Hardon includes some lovely thoughts and prayers to St. Joseph. As we approach the March 19 Feast of St. Joseph I will share a few of these gems.

The special motives for which St. Joseph has been proclaimed Patron of the Church, and from which the Church looks for singular benefit from his patronage and protection, are that Joseph was the spouse of Mary and that he was reputed the Father of Jesus Christ. From these sources have sprung his dignity, his holiness, his glory. The dignity of the Mother of God is so lofty that nothing created can rank above it. But as Joseph has been united to the Blessed Virgin by the ties of marriage, it may not be doubted that he approached nearer than anyone else to the eminent dignity by which the Mother of God surpasses so nobly all created natures. For marriage is the most intimate of all unions which from its essence imparts a community of gifts between those joined together by it. Thus in giving Joseph the Blessed Virgin as spouse, God appointed him to be not only her life’s companion, the witness of her maidenhood, the protector of her honor, but also, by virtue of the conjugal tie, a participator in her sublime dignity.

Joseph shines among all mankind by the most august dignity, since by divine will, he was the guardian of the Son of God and reputed as His father among men.

From this two-fold dignity flowed the obligation which nature lays upon the head of families, so that Joseph became the guardian, the administrator, and the legal defender of the divine house whose chief he was. He set himself to protect with a mighty love and a daily solicitude his spouse and the Divine Infant; regularly by his work he earned what was necessary for the one and the other for nourishment and clothing; he guarded from death the Child threatened by a monarch’s jealousy, and found for Him a refuge; in the miseries of the journey and in the bitternesses of exile he was ever the companion, the assistance, and the upholder of the Virgin and of Jesus.

Now the divine house which Joseph ruled with the authority of a father, contained within its limits the scarce-born Church. From the same fact that the most holy Virgin is the mother of Jesus Christ is she the mother of all Christians whom she bore on Mount Calvary amid the supreme throes of the Redemption; Jesus Christ is, in a manner, the first- born of Christians, who by the adoption and Redemption are his brothers.

Therefore the Blessed Patriarch looks upon the multitude of Christians who make up the Church as confided specially to his trust–this limitless family spread over the earth, over which, because he is the spouse of Mary and the Father of Jesus Christ he holds, as it were, a paternal authority. It is, then, natural and worthy that as the Blessed Joseph ministered to all the needs of the family at Nazareth and girt it about with his protection, he should now cover with the cloak of his heavenly patronage and defend the Church of Jesus Christ. 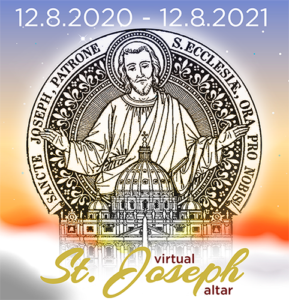 Consecrate the month of March

The 2021 Virtual St. Joseph Altar is now open and

Have a beautiful Lent!

St. Joseph Altars come in all shapes and sizes. Ma

What do all the items on the St. Joseph Altar mean

“Of old it was said to the needy and suffering p

Learn more about the “lucky bean.” Link in bio