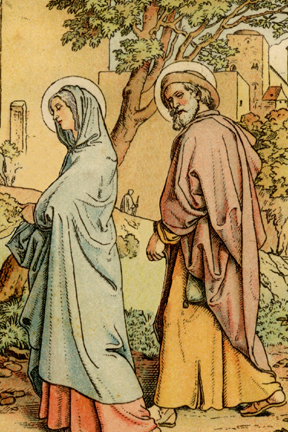 Reprinted from a December 22, 2013 parish bulletin:

The strength of what we believe is measured by how much we are willing to suffer for those beliefs. Saint Joseph was a man with strong beliefs. He was prepared to do what was right despite the humiliation and pain he knew he would experience—yet what is important is the way he chose to do it.

When Mary told Joseph about her pregnancy, he must have been distraught. He knew Mary’s real innocence. He wanted to believe what she told him. He was not the child’s father—but God? How could this be? Joseph decided that their engagement had to be broken; but though he needed to act justly, he knew it must be done with love. With such a holy attitude, he was open to the intervention of God. In a dream—through an angel, the Lord consoled Joseph, ratified the truth he had been told about the unborn child, and then assigned his important role to claim and name the child, Jesus.

Saint Joseph is shown to us as a man of integrity, sensitive to the direction God offers to people of faith, who was concerned about doing the right thing in the right way. His loving compassion for others, his complete compliance with the plan God reveals for his life, and his lack of self-interest throughout the account of Jesus early life, make him an ideal patron saint for every believer. For all these reasons, Joseph was named by Pope John XXIII as the patron saint of the entire Church.

You may have noticed that just recently, since the new Missal was issued, Saint Joseph’s name has been inserted into the Eucharistic prayer at every Mass. When we hear it, it should be a reminder to us to mirror, compassion, obedience, and selfless love in all we do as people of faith.

This blog is part of the Virtual St. Joseph Altar, which made its online debut in February of 1999. During the month leading up to the Feast of St. Joseph, visitors can make virtual offerings to the Altar. Deceased loved ones may be added to the prayer list, and prayer intentions can be added to the prayer requests page all year long. Viva San Giuseppe!

Be notified via email when the 2021 Virtual Altar opens!

Every Wednesday is St. Joseph’s Day